There was a point in time when the floor was literally ripped from beneath our feet! No, this is not about 1997, but about an event that happened in January 1991.  Imagine it, the floor being taken from under us!  It didn't seem feasible at the time! It happened though!

January is always a hard month.  The cold Manchester winter, the come down from the Christmas and New Year excesses, having to dig in pocket wise; most of us skint but still living for the night!  Then it happened!

Granada News announced it one tea time. Tony Wilson was no stranger to reading the news but suddenly he was now making news! 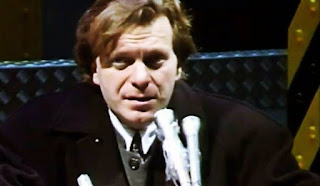 "It is with the greatest reluctance that for the moment we are turning the lights out on what is, for us a most important place.
We are forced into taking this drastic action in order to protect our employees, our members and all our clients. We are quite simply sick and tired of dealing with instances of personal violence.
We hope and we must believe we can reopen the Hacienda in a better climate. but until we are able to run a club in a safe manner, and in a way that the owners believe will guarantee the role of the Haçienda at the heart of the city's youth community, it is with great sadness that we will shut our club."

(Taken from How Not To Run A Club by Peter Hook - well worth a read too!)

'What the $!&%!' Nooo!"   Post January blues somehow went a little darker. I'm not gonna lie but all I remember is the last line - "Shut our club!"  Gutted is not the word. I mean we had just been given a red and black enamel FAC51 badge and membership card applications a couple of weeks earlier the latter a bid to control the doors and appease the Magistrates! 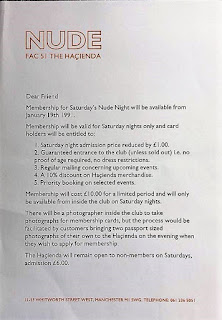 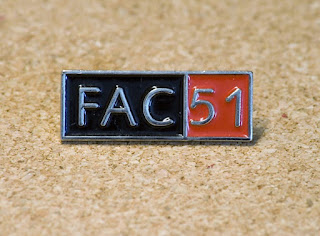 Plus there had been repeated attempts by the Haçiendas' management to publicly project an image that action was being taken to control things inside the club as the statement below shows.  James Anderton Chief Constable in Manchester's Police Force was certainly rumoured to be making things difficult for the Haçienda and for ravers too come to think about it! All we wanted to do was be left alone to party! 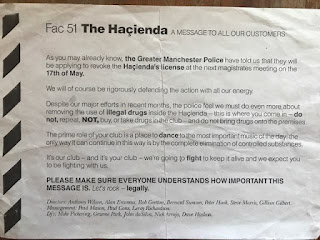 Questions, questions -  How? What? Why? When will it re-open?  Where will we go? So many questions not enough answers! All we knew was Saturdays will not be the same.   It is well documented as to why it shut the doors that cold January, gangland fighting, drug wars, apparently it had become too dangerous.  Certainly there were parts you didn't venture to, darker corners so to speak, an alcove or behind the DJ box - but this certainly hadn't been my experience. Yes, rumours were aplenty and if you happened to make eye contact you just smiled, looked busy and turned the other way and got on with your night.  Personally I had so many great nights and I didn't want them to stop!  However, we did understand their decisions and brave ones they were too.  Fingers were crossed that it would reopen. If memory serves me right, it was meant to be shut for a few weeks, a month max!  We waited and waited..... it didn't feel good at all.  Rumours were abound, and hopes were raised when someone mentioned it was getting an uplift!  All we could do was get on with our partying!

The next few months were spent going to Ku in Huddersfield, we had some great all nighters there with Sasha.  Wakefield, Leeds and Warrington Legends became frequent haunts to with new friends, new experiences and broadening music tastes..... the good times continued!   Alas, without disrespecting any of the above, it wasn't the Haçienda!  It just wasn't the Haçienda!

Then all of a sudden - OMG! YES...... I recall a phone call from my friend in Manchester with the sweetest news to tell. Noooo! it just can not be true!  After a frosty Spring of weekends spent venturing up and down the North West's motorways and across the Pennines the announcement came.    The moment we had waited for. 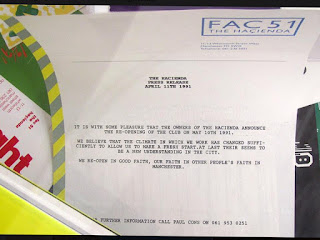 Bring it on!  The Haçienda was re-opening and in time for the Birthday too!  If I recall correctly, our hallowed nightclub had been given a lick of paint, a bit of a revamp, it looked vibrant and in a bid to tighten security had added an airport type metal detector.   Certainly body checks were the order going in and from then on! Some of the changes are described below in a newspaper article from the 10th May highlighting the opening night billed as the 'Healing'. 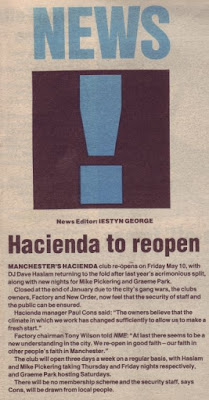 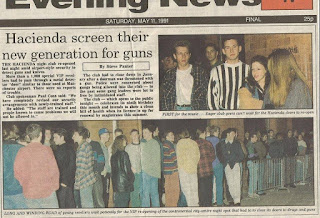 However it was the 11th May, a Saturday, the night we had been waiting for and gracing the decks was Parky. Good times! I cannot describe the buzz of that warm Spring night.  The queue was alive with the expectation of what was to come and excitement was high - we were back in business and on our way in to the Haçienda.   Naturally it was truly a great night and it was great to feel that raised sprung maple wood dance floor under our feet once again and dance the night away we did!   If you fancy hearing the set for yourself feel free to download!  Enjoy. 😋

I would like to thank the original owners for taking the time to share some of the images capturing this unique slice of clubbing history.
Posted by Andrew at 19:29