Every now and then we hear a tune that becomes synonymous with a certain time, place or event from which we first heard it.  Music can spark memories and emotions that become deep seated and when listened to whether it be days or years later, we are instantly taken back to the moment we first heard it. 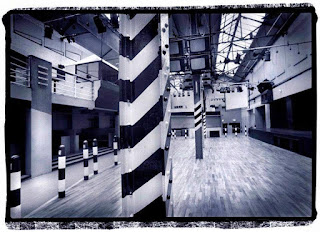 Throughout 1987 to 1988, the Haçienda was dominated by a wealth of underground American dance records that were fresh out of Detroit, Chicago and New York.  Record labels such as Transmat, DJ International, Traxx and Big Beat to name a few would provide the soundtrack to our party nights and we loved it, we couldn't get enough.   As the first summer of love progressed we partied to this new house sound however from late 1988, we began to see a change to this US dominance. Now it was the turn of Manchester to create a stir.  Something was in the air, something very special!   Picture if you will, a heaving dance floor, picture wide eyed, smiling ravers moving in unison, losing it to each breakdown, each build up, to each peak of each record then out of the blue, Pickering dropped a track for the first time!   It was unmistakable; you can never un-hear it - why would you even want to! 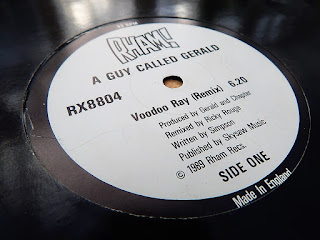 The name of the record was Voodoo Ray by A Guy Called Gerald.   When you hear it for the first time you could be forgiven for wondering if it had been purposely written for the Haçienda. As for me, from that first listen, I feel it was destined to be a defining Haçienda moment.  Whenever I listen to it, it feels like the song is part of the essence of what the Haçienda was about if you know what I mean?   The Haçienda would provide the perfect setting to unleash what is one huge track! With it's trance-like, tribal, acid baseline and haunting vocal hooks, Voodoo Ray pounds, pulsates and permeates, rattling that huge warehouse space, flowing into every corner, every nook, even seeping into the brick work!  The crowd knew it too!  We went mental - talk about right place right time!   It was so uplifting being on the dance floor as Nicola Collier's beautiful vocal chant would emerge from behind the preceding track. Our hands would lift automatically in unison, reaching high as if in exaltation to the addictive acid melody, our body's jacking to the thumping beat and our spines tingled joyously as we grooved in time to the tribal, almost hypnotic, steel drum carnival undertones and beat!  Smiles fill the soul and you are hooked!   'Hey-ya ah ha-hey-hey-hey-yah' - the floor erupts, it goes wild, and the chant lasts forever..... as we sang 'Voodoo Ray, Voodoo, Voodoo, Voodoo Ray' echoing around that church of acid house!  Just typing the name 'Voodoo Ray' makes me think of the Haçienda, and that first time I heard it. 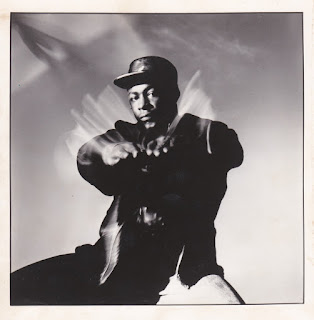 Written and produced by a talented Mancunian - Gerald Simpson who we know and love as 'A Guy Called Gerald!'  At the time Gerald was in another seminal group from that time - 808 State.  During the summer of 88, Gerald was dividing his time between working in the studio with 808 State, spending evenings in the Haçienda and trying to make ends meet at McDonald's, but he also had aspirations to cut his own track, the way he wanted to!   Taking his influences from Jazz Funk, Soul, Dub, Electro, and early Detroit house tracks, he took inspiration from dancers such as Foot Patrol and Jazz Defektors who were active in the black club scene,  It was with these in mind that Gerald would sneak off recording sessions to put his own tracks together.   Gerald found a sample on a vocal record by Peter Cook & Dudley Moore (British comedians).  Initially, the intention was to sample this phrase, 'Voodoo Rage' but the sampler didn't have enough memory and the resulting track was born.... 'Voodoo Ray'.  It just rolls off the tongue. 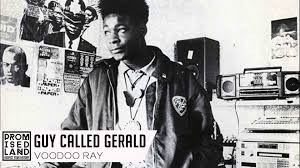 Voodoo Ray was recorded over two days in June 1988, after which Gerald set out to press five hundred white label copies on Rham!  These were reported to have sold out in a day despite initially being hailed as 'being too British' by some critics.  Nonetheless, eager to promote his record, Gerald took a test tape along to Stu Allan, a DJ on Piccadilly Radio in Manchester.  Stu Allan played the track on his show, announcing it as 'being from 'A Guy Called Gerald' a kid from Hulme.' Stu Allan had inadvertently given Gerald his name - the rest is history! 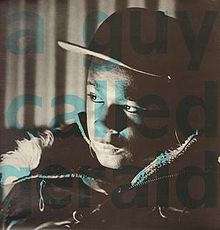 I read an interview, where it was reported that Gerald  dropped a copy of Voodoo Ray off  at the flat of Jon DaSilva (Haçienda DJ) to see if he would play it.  Jon who lived in the same Hulme flats as Gerald said he would. As Gerald was leaving the flats, he heard it being played, echoing around the concrete corridors - I can only imagine the excitement that he must have felt at that moment!  Such was the impact, Voodoo Ray was soon getting peak airing at the Haçienda with Graeme Park, Mike Pickering and Jon DaSilva championing it. Gerald recalls hearing Voodoo ray at the Haçienda for the first time and it 'blew him away.... there was nothing else like it'.

Over the next few months, Voodoo Ray was to become a huge clubland success. It filled dance floors all over the UK. Copies flew out of independent record shops and soon It was to become a chart hit born out of this dance floor success.   Warlock a prominent record label in the United States went on to release Voodoo Ray with a remix by Frankie Knuckles himself.  However it was the homegrown original that was to reach number 12 in the British charts in July 1989, argueably perhaps the UK's first great house anthem! 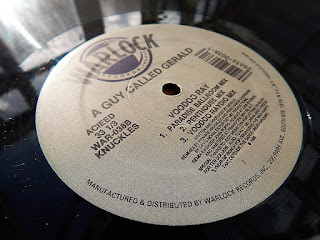 In my mind, 'Voodoo ray' was one of those moments that defined what was going on in clubland and with underground music at that time.  It represented the get up and do it yourself attitude of young clubbers in the UK.  Just as the house pioneeers had done with disco in the states, kids in the UK now took the great elements of US House Music and delivered it full force back to clubland.  The result was to take the scene in a total new direction and they blew the minds of US Dj's!  Tracks like A Guy Called Gerald's - Voodoo Ray and 808 State's - Pacific State could have so easily been mistaken for US House records but the beauty is, they were homegrown, written by kids who took their inspiration from the dance-floor and what is more - they  inspired others to do the same! The scene was to soon explode - all very reminiscent of the punk scene just over a decade earlier!    It is also great to dance to, too! 😊 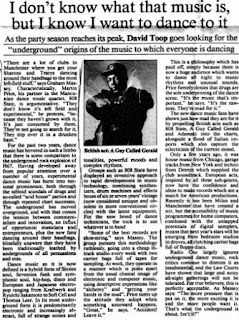 Once again picture it!  It could have been the Autumn of 1988, it may have been the Summer of 1989, or maybe a field or nightclub in any town, in any country or in any year! The time or location is not what is important. What is important though, is that first time. That first moment where you are dancing, lost in the groove and all of a sudden you hear the chant, the beats and that acid baseline..... Ooh (ooh ooh ooh ooh) - Hey-ya ah ha-hey-hey-hey-yah.... Voodoo Ray.   It grabs you, holds you and becomes emblazoned on your soul.  It makes you want to sing, it makes you want to dance and it makes you wish you were there once again, reliving the moment when you first heard it, on a dance floor at the Haçienda!

To capture the moment and experience 'A Guy Called Gerald's - Voodoo Ray' as we once did - here is another set for you to enjoy.   Turn up those headphones, crank your speakers up loud. Where ever you are, what ever you are currently doing - stop, close your eyes and picture yourself at the Haçienda..... Voodoo, Voodoo Voodoo Ray!   Enjoy! 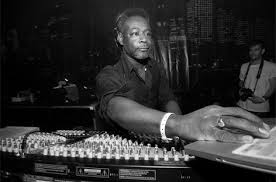 Today, 'A Guy Called Gerald' continues to be a key figure and highly influential both in the UK and Internationally, recording and producing music as well as DJing.   To find out more click the link and visit the website of one of UK first house music producers!
Posted by Andrew at 18:28