Happy 38th Birthday Hacienda!
Thanks to Trevor Johnson for the use of the image.


This post should have been made yesterday! However, in the 'best tradition of the Haçienda' it was slightly delayed! 😁 Still, it has now been posted!

Long has it been documented of the link between the  Haçienda, New York and disco music!  The legend begins back in the early 1980's after Rob Gretton, Tony Wilson and New Order's many visits to the Big Apple, at a time when NYC was a mystical and magical place for us Brits.   The hedonistic, drug fueled nights spent experiencing 'Italio Disco, Hiphop and Electro' in New York's underground clubs - such as 'Hurrah, Paradise Garage and Danceteria!' must have been life changing compared to the rain-soaked drowdy atmosphere reported at the time in Mançhester's clubs. Punk had opened the city up to new experiences, a do it yourself culture, which perhaps had at that time begun to settle,  so the heady atmosphere of New York's nightlife must have been addictive!   Tony Wilson was so enamoured with his New York experiences, that he set out to recreate them and 'give something back to the kids of Mançhester'. Perhaps, little did he realise at that time, the scale of the impact he was to make on the city of Mançhester!  The hedonism of New York's disco clubs was about to give birth to the Haçienda. 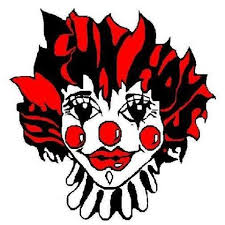 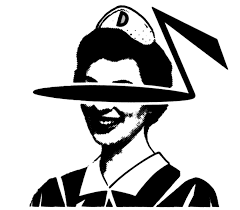 Fun House & Danceteria - both nightclubs were hugely influential for the Hacienda.


The relationship between New York and the  Haçienda / Mançhester was strong, Arthur Baker, DJ/Producer at  The Fun House' produced New Order's electro influenced Confusion, ESG a band from the club Hurrah were to open for ACR and record on Factory, plus the iceing on the cake occurred in 1984  when the infamous 'Danceteria' was invited to visit the Haçienda, gracing Mançhester with a taste of New York's finest DJ Mark Kamins!  This could only have happened due to the music policy being inspired by Dj's such as Greg Wilson, Hewan Clarke and Mike Pickering who championed the sounds coming out of New York's underground clubs and those first disco experiences of those visiting New York!  Greg Wilson in a heart-felt, personal tribute to Mark Kamins, explains that Mark was 'the first international DJ to be booked to play at the Haçienda'.  Plus we all know that Parky loves to mix into his sets a little disco here and there! 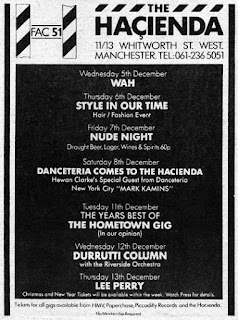 Fast forward to April 1992.  A superb month at the  Haçienda.  At last we were shaking off the cold, bitter grip of Mançhester's winter, the spring nights were starting to turn and we were looking forward to another summer of  Haçienda clubbing.  Inside the  Haçienda, the energy was building, the floors were full and the expectation high!   Graeme Park and Tom Wainwright were on top form, life felt good, the music felt good, exciting and the house scene was flourishing, emerging away from it's 'rave' label to becoming more refined!  US dubs and vocals were pouring into the country but it was one particular track that caught my ear that month.  Parky and Pickering, had been dropping an accapella of this track for some months.  One set from 1991 saw it played repeatedly during the night. Howevert it was a remix that was to take the Haçienda by storm. The buzz on it was immense and it proved to be a tune that was to become difficult to get hold of, trading for huge sums!  Indeed it took me months to own one.

Originally released in 1987 on Vinylmania, a Garage House label based in New York, this track had already been a disco/garage hit in the underground clubs.  However it was a remix that, for me, took the Hacienda by storm - it was perfect for the design of the club, its high roof and long dancefloor and it blew the place apart!

Imagine my joy when I found out the artist. Feverishly I set out to get a copy but alas it appeared to be as rare as hens teeth!  Was it a Morales mix? Did Tony Humphries produce it? It certainly was worthy of either of these two great New York Djs and it sure sounded like an American release to me.   A stripped down, deep house sound; with an uplifting piano and the most beautiful commanding vocals that filled the church of  Haçienda!   It may sound silly now,  but back then it was not possible to do a quick google search or ask Siri to name that tune, it definately wasn't so easy to get those elusive records. I do recall enjoying the sun one morning after a weeknd clubbing at the  Haçienda. It was approaching Easter, Parky had played the track a couple of nights ago and the urgency to find it was high. There I was lay on a flat roof on top of a bay window from the flat below me and nearly fell off as I flicked through a mail order catalogue from Hard to Find records.  I loved scanning these monthlly catalogues seeing what they had, the value of each tune and was always amazed that they would pay your train fare to go there - if you spent a certain amount that is! At last I thought this is it - found it! A quick phone call and I was in seventh heaven - and no,  that was not the name of the record!.  At last my copy was on the way!  Excited was no where near how I felt. 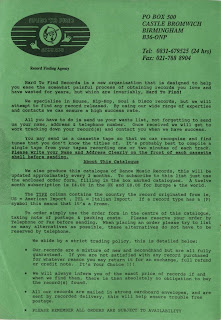 At last, one week later the elusive, most precious sought after record had arrived, I felt like I was rushing when I placed it on the decks! However it wasnt the mix that I was after! Noooo! However I wasnt disappointed!  Even though it wasnt the one I wanted - it was good - real good.  So good infact that it was to take my collection in a new direction, one that has stayed with me until this day......  Now, although I was still looking for the elusive mix, and I still didn't know who had mixed and released it, this version was played constantly.  That accapella was worn down.....  Anyone who went to the  Haçienda in 1992 and beyond will instantly recognise it! 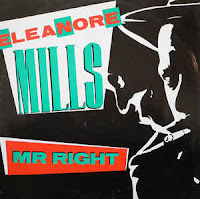 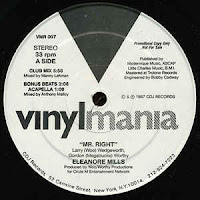 Enter a rolling tambourine intro, teasing bongos, kick drum with a spoken vocal introduction, catchy, melodical keyboards dance along until a phat baseline and piano lift us providing a platform to the most beautiful, sultry, and seductive vocals leaving you with no choice but to sing along.  Just when you thought it could get no better, a huge, awesome synth break down grips you, takes you higher and higher until a sax loop gently leads you into the next track... pure disco house heaven! - what more can you ask for..... catchy lyrics perhaps? 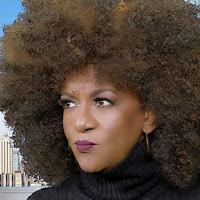 
It was some months before I finally found my copy paying £30 for it second hand. I was ecstatic.  Eleanore Mills had provided us with the perfect disco garage song to which Graeme Park produced the perfect garage house remix!  Released on DMC records - April 1992 - Parky's mix was distributed to DJ's only.  The Superb Parkside Mix had captured that perfect Haçienda sound bringing the dancefloor to life!  it is a record that still played and enjoyed in my house to this day. 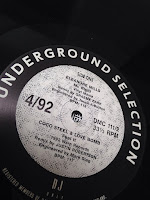 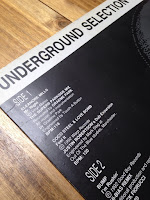 
Mr Right has been given a few dance remixes since 1992, but none have ever touched the original or the Parkside DMC remix....  Below is a link for a Graeme Park set recorded on the night on April 28th 1992.  You can now hear for yourself an unmistakable Haçienda Classic. 😘 I hope you love it as much as I have - Enjoy x