There were many great gigs at the Haçienda in it's history, New Order and the Smiths in 1982/3, Gene Loves Jezebel! (I know but we all have those secrets!), Nico from the Velvet Underground - sheer beauty and class (I fell for her that night as we sat on the dancefloor mesmirised by her sultry voice) and then there was the Stone Roses to name but a handful.

This night at the Haçienda was something meaningful.  Can you believe that this gig happened nearly 25 years ago!  A temporary shift from the pounding deep beats that dominated the Haçienda around 1989 to bring you an experience that defined the Manchester sound.  'All the colours fade' was brought to us by the Roses, energy attitude and utter brilliance.  We went home meaningfully singing 'Adored' and 'I Am the Ressurection' buzzing excitedly for later that week when I was to DJ for the Roses at Warrington Legends!  I thought I had arrived! DJ'ing for the Roses!  To be honest, my memory of it was they didn't sound that good... what they were though was utterly brilliant.  The Roses dominated and filled the dancefloor, a baggy swagger of attitude and of get up and show the world how to do it - and they did! Great stuff, great memories, and a reflection of the greatest club in the world.  Faç51 the Haçienda. 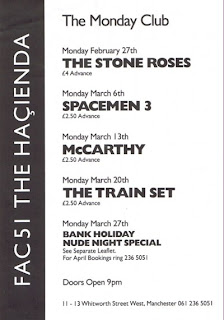 Track list
Thanks to HenryVilla for the download, your dedication and passion for the Roses knows no bounds fella.  Glad I got to see them in Heaton Park with you even if you can't teach Mancs to speak Mancunian!!

Email ThisBlogThis!Share to TwitterShare to FacebookShare to Pinterest
Labels: 1989, All The Colours Fade, Haçienda, Monday Club, Spiral Through Another Day, Stone Roses