Another Blog51 exclusive.  A new set from a shine night in 1992 from Russ.  Regularly DJing alongside Mike Pickering and Sasha, Russ soon had a strong influence and following in and around Manchester.  He ran his own record shop and a few years later had one of the most influencial nights called 'Out In The Sticks' at a small club called the Blue Note in Todmorden just outside of Manchester.  It may have been small but that basement room had one of the sweatiest most uplifting dancefloors of all time, with Russ and Craig attracting the likes of Brian Tappert and Full Intention to join them on the decks.   When the Haçienda sadly shut it's doors in 1997 this is where we and many of the Haçienda regulars headed off to.  Russ and Craig ran an excellent night in the most unlikliest of places - the northern mill town of Todmorden.  Indeed within a month of the faç51 doors closing Graeme Park played his first set at the Bluenote. 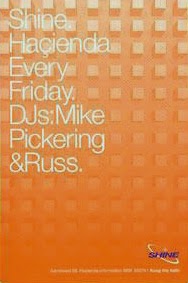