Do You Own The Dancefloor?

Anyone who reads the warblings in my BLOG51 can see what impact the Haçienda has had on my life, there isn't a day where the place, the music doesn't enter my thoughts or ears!   It is easy to think that this is boardering obsessive and sometimes I do wonder about myself lol!  Not only have I amassed an array of tapes but also Haçienda merchandise, along with mementos such as badges, posters and flyers that are still highly sought after even today but there are some things that are just that bit more special.....

A few years ago a few Hacienda devotees asked a question;  'Do You Own The Dancefloor?' Subsequently they went on to make a film that in my eyes, hits the nail right on the head as to just what the scene was about!!   The film not only documents aspects of the Haçienda itself, the music and the design,  but also the passion, the energy and the devotion of the people, clubbers and instigators that made the Haçienda the phenomenon that it still is today.  In my eyes that is a special and rare thing......  see the trailer below......


To quote the makers of the film "In November 2000, many of the key elements from the iconic venue the Haçienda ended up as 69 lots at a charity auction before it was demolished to make way for a block of apartments. It resulted in parts of the nightclub - the epicenter of Manchester’s pop culture in the 1980s and 1990s – being scattered across the world.
As well as the auction, our film tracks down what happened to the parts of the club itself, whose famous industrial design by interiors guru Ben Kelly included motorway cat’s eyes, traffic bollards and hazard signs.

The documentary isn’t just about the Haçienda. It’s also about the people so affected by their times there, that they had to come to Manchester to bid for bricks, toilets, exit signs and even pieces of the hallowed dance floor – and also about where those mementos are now".

Every time I watch the trailer I get goosebumps.... a tear in my eye and a grin as wide as a Cheshire cat!  Emotions flow - It makes me feel sad due to it's closure and so elated as I was able to take part in the club that changed the world - enjoy!

Lovingly the  proceedes raised from the film go to Kidneys for Life & Cancer Research. 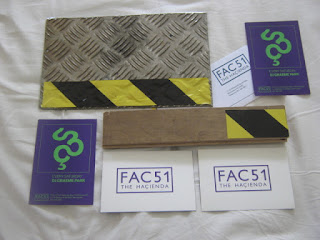 My piece of the dancefloor, some flyers from the shiva Saturday night in 1991 and a piece of the staircase trim plate

Email ThisBlogThis!Share to TwitterShare to FacebookShare to Pinterest
Labels: Ben Kelly, Do You Own The Dancefloor?, Haçienda