A timeless set from David Morales recorded at the 11th Birthday Party night back in 1993.  Seemlessly mixed and full of energy.  Morales played in the basement of the club; a dark, dirty and hedonistically sweaty room perfect for messing with the mind, body and soul! playing tracks from MAW, Todd Terry, Pfantasy and Marshall Jefferson to name a few.

To quote 'Trackhead' to whom I owe thanks for the original upload of this set 'Stripped to the waist, wearing a skull cap & tattooed muscles, Morales played street tough New York City house music, and there's lessons in here for modern DJs'.... Morales rocked and always will do!!

Sadly as far as I can recall, Morales never played the Haçienda again due to a joyless squirmish involving the throwing of a bottle!  At least we have this superb set to remind us how great these nights were, how Morales ruled the dancefloors and once again another Haç memory for us all to enjoy. 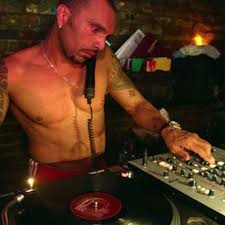 Morales captured in the mix in the basement DJ booth