Love him or loathe him - gobby, charismatic, flirty, cocky, arrogant, loveable, funny, polemic, cheeky, blunt, twat are but a few of the politer words that could be used to describe a true Manc character.  No, I’m not talking about Anthony H Wilson but another television presenter who became a bit of an icon back in the day. Arguably you could say that this someone could easily have been pulled direct from the loins of Mr Wilson! 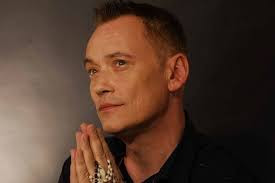 Radio DJ, television presenter, band manager, music journalist and general shit stirrer. This person is none other than Terry Christian. Terry was to dominate our late Friday night television viewing for the next 5 years. The name of the show was 'The Word,' named after articles Terry wrote for the Manchester Evening News show-casing Manchester’s up and coming music talent. There is no getting away from the fact that Terry Christian played his part in bringing the story of Manchester's youth culture to a wider audience - a parallel drawn here with Mr Wilson me thinks! 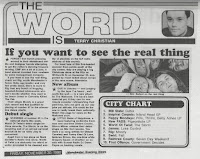 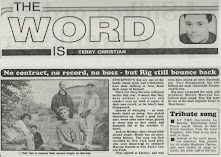 By the end of the late 80's, popular youth culture had gone stale. Shows such as Top of the Pops along with the Hit Man and Her, were frankly crap leaving a gaping hole in entertainment for youth culture. Friday nights consisted of getting home munted from the pub then switching on the television to find The Hit Man & Her dismally showing us what a good time we could have.  It was like watching peacocks dancing round handbags trying to attract the opposite sex in the failing hope of having a pissed up one night stand at the end of the night! Oh, what a lifeless good time we could have! It was enough to make you scream. It’s little wonder that a new underground scene emerged but that’s a story for another Blog51 post. 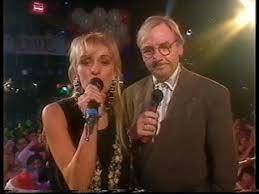 Wind on a couple of years... 1990, the Haçienda was at fever pitch, kids were dancing in fields and aircraft hangers; Madchester was biting the ankles of the music industry, gripping firmly at the sinews of colourless music moguls, when along came a new youth culture show that snarled, shook and spat out the remnants of all we had known before. Anarchy was raising its beautiful chaotic head once more. We switched on to a show certainly was chaotic, definitely in the moment, as if you had brought your night out back home with you to be replayed on the tv and definitely not to be screened in front of your mam and dad! 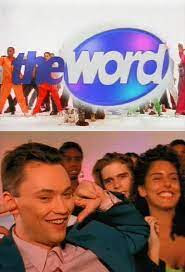 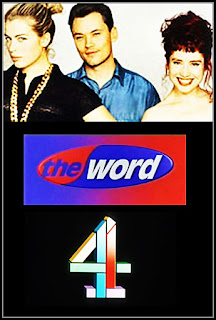 Channel 4 Banners advertising The Word
Brazenly loud, psychedelic, fresh and in your face; 'the Word' appeared on our screens from August 1990. It was as if Madchester had been transported to our screens.  Somehow the boundaries of staid youth television had been broken, the studio decorated like a Happy Monday’s album cover, the crowd danced between the stage and the presenters, the sound system was cranked up and it seemed someone had added chemicals to the drinks. it was cool, honest no-frills entertainment. Youth subculture was beginning to subtly take over the mainstream.  Through Terry, Manchester's hedonistic legacy seemed to pour through every televised moment. Bands such as the Happy Mondays, Inspiral Carpets and 808 State were interviewed and performed live, the show even went as far to broadcast live from Los Angeles at the Roxy club when the Hacienda DJs were on. Perhaps it was just the accent! The show's theme tune, straight from the dancefloor,   Manchester's own 808 State's 'Olympic' created an atmosphere that something fresh was happening and what a ride it was.  Suddenly, we were exposed to some great music, bands, chat, interviews and some right funny moments that once seen were not going to be forgotten in a hurry!  Presented by Terry, co-hosted by Mark Lamarr, Dani Berr and Katie Puckrik, the opening weeks saw Adamski, 808 State and the Farm playing, we knew it had a different pulse, a pulse seated in the knowledge and experience of underground Club Culture... enjoy the trip and what a trip it was. 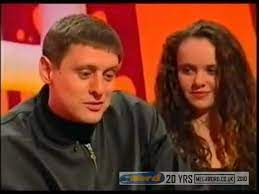 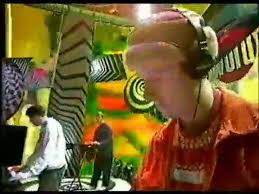 Shaun Ryder & 808 State live on The Word 1990
Picture a paralytic Oliver Reed trying to ad-lib to the Troggs 'Wild Thing' performed by Neds Atomic Dustbin, I've never seen someone so pissed stand, let alone sing but he did or tried too. Imagine the singer of L7 going full frontal removing her clothes during a superb airing of 'Pretend we are dead' It was a producer’s nightmare and it happened live before our eyes.  Weirdly enough, just as Tony Wilson started off broadcasting bands on his television shows, introducing bands such as the Sex Pistols, Joy Division and the Fall, Terry continued that tradition. The Word gave us screen debuts for future Brit-Pop bands such as Blur playing 'Girls and Boys', Oasis's first airing of 'Supersonic' and Nirvana's performing the excellent 'Smells Like Teen Spirit' - can you ask for more? Yet more did happen, Shaun Ryder of the Happy Mondays appearing on the show as he does best so to speak and a rat-arsed Ivy Tilsey from Coronation Street drunkenly crucifying Gloria Gaynor’s I will survive! Ouch. 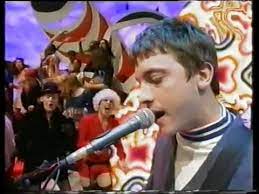 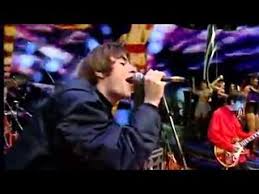 Blur & Oasis Make Their Television Debuts on The Word - The Precursor to Britpop!
Then there was a hip audience, kids from the clubs that seemed more clued up, a crowd willing to let themselves go and more importantly kids rightly willing to heckle and stand up (along with a Mark Lamar) to Shabba Ranks for his then anti-gay views. However it was an aspect of audience particiaption that was to lead to the show's demise - the Hopefuls. How could we forget the chance for fame for the 'hopefuls'. We knew something was coming each week but perhaps we weren't quite ready for what we saw - the sweaty belly button licking, tongue kissing a pensioner or the fish licker - the things a member of the audience did for a moment of television fame. It was a constant source of amusement the next day.  Bizarre I know, certainly for 1994 it was, yet perversely this seems the norm for the TikTok generation. 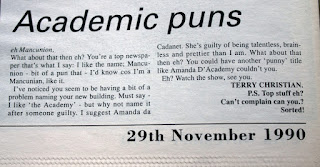 Manc wit - tongue in cheek article for the Mancunion Newspaper - Manchester Students Union.
Terry Christian was brilliant. Fresh faced with cheek bones to die for, energetic, tongue in cheek, flirting like a dog with two tails, I’m sure he presented it purely for the ride. The show seemed totally unscripted, nothing seemed to faze Terry and he let his interviews go wherever the conversation went.... no boundaries for sure.  Where else on television would you hear a presenter ask the lead singer of Fem 2 Fem 'when did you lose your virginity' and get away with it!  Terry did, after which a woman from the audience slapped him a good one! Totally unscripted, totally wild.  Watching Snoop leaning away from Rod Hull and Emu was priceless - we were heart in mouth at the sight of Snoops face, just waiting to see if he was going to take that bird out!  The media had a field day, critics drew their knives - in the words of terry Christian 'the show with more critics than viewers'.  It was absolute television gold with an audience of 3 million a week who all couldn't all be wrong.  Nudity, mayhem and hedonism rolled into 50 minutes of inebriated television viewing that somehow lasted five years.  Others have tried to replicate it, but none have even come close (no names TFI Friday!)  I could go on and on however, feel free to search the web for yourself - best with a smoke and a drink though! 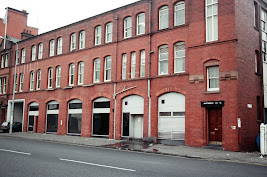 What has all this got to do with the Haçienda?  From my clubbing days I had stashed away a small box of tapes bought from the DJ box or handed out between friends. Tapes that had been played over and over and I had always yearned for more.  Fast forward to 2000, I was listening to Century 105.4 FM radio show when Terry Christian announced he was airing a Haçienda set on New Year’s Eve.

Minidisc at the ready I set about recording what is now perhaps the most shared and streamed Hacienda set on the net.  The energy is unbelievable.  It feels like it has been recorded from the middle of the dancefloor... impeccable mixing, superb tunes all set to a backdrop capturing the atmosphere and the sounds of hedonism from an ecstatic Haçienda crowd. What made it more special is that it was recorded from the time I started going regularly, secretly I hoped it was from my first night there, but I will never know for sure.  I was over the moon and hammered these minidisc recordings.  However, I wanted more.  At the time, the internet was relatively new, it certainly wasn't in everyone’s home by a long shot. Imagine my delight when I started my searches (it sounds weird to say but a new world literally opened up, knowing others were after the same as me) so began my journey collecting Haçienda sets; 560 recordings and still hungry for more. 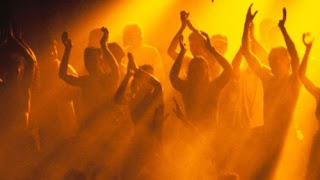 The crowd is everything!

Known on the net as the 'Century FM' recording, this is perhaps the go to tape for anyone wanting to hear what the Haçienda was like.  2 hours 50 minutes of pure Haçienda delight. Everyone has it or has played it. However, this recording has a little something extra.  Introduced by Terry Christian himself, there is no mistaking the broad tones of his best Manc accent.  Terry leads us through a description about Madchester, setting the scene before introducing the infamous Nude night at the Haçienda, £3.50 to get in, Friday the 18th of August 1989 to be precise.   Broadcast on NYE 2000/2001, I recorded this over three minidiscs.  This set is different from the one you may have already listened to. It has an extra 40 minutes or so not heard on the internet and brings in the NYE chime bells.  Here you will find part of the set that may be new to you.  What a night!  I have kept the recording as is.  Should you choose to play it in its entirety, you will hear that part of the night has been looped and played twice. This brings the total recording to approximately 4 hours long as was originally broadcast by Terry Christian on his show aptly named 'the Haçienda Sessions.'

The second summer of love 1989 was special, Terry's broadcast made it extra special - Enjoy...