Summer 1990, temperatures were rising, the Haçienda was rammed, and the love poured out on the dancefloor.  It was the place to be. The queue to get in stretched round the block, gone were the days of going for a few beers and sauntering in around 11pm. If you weren’t early, you simply didn’t get in.

Chicago, Detroit, New York, Italian and British House music dominated the underground dancefloors along with a new wave of British Indie dance artists. New Order, The Stone Roses, Happy Mondays, Inspiral Carpets, The Charlatans.  The Manchester scene was now a breeding ground for home grown talent, that was to add feverish energy to clubland. The Beloved, Candy Flip, 808 State, A Guy Called Gerald were all making waves, both at home and on the international scene. Life felt like one huge party, starting Wednesdays and finishing when you struggled home on a Sunday evening - dreading the thought of having to eat a full roast dinner.  24 Hour Party People was an understatement. 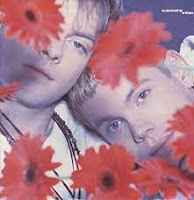 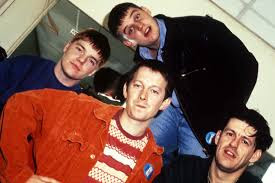 Candy Flip & 808 State
I recall one Wednesday night, walking into the Haçienda through the huge plastic factory style screen that separated the infamous 51 engraved doors with the dancefloor. These screens served to muffle the excitement on the other side, screens that when you pushed them aside, added another dimension to the thrill as you bounced into a nirvana of hedonism.  As I pushed through those screens, I noticed placed outside the reception door some tables selling merchandise.  Above the tables were t-shirts and tops for sale. Emblazoned on them was a design for a 'United Sates of Haçienda Tour. 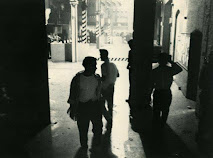 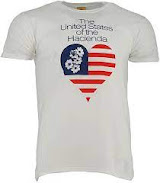 To the left of the pillar is the reception door where mech was sold
I stood marvelling at the thought of going, Manchester taking a taste of the Haçienda to the place that had given us the origins of the music we loved.  It seemed romantic but a tad out my league and I thought little more of it except to stare and dream every week. I wish I had bought one, I wished I could have gone thinking that I would never know what it was like.
Some years later that this memory was rekindled. On a whim, I bought a couple of original flyers from the tour which renewed my interest. One of the flyers promoted the theme, 'From Manchester with Love' it was very in keeping with the loved-up feelings rife in the clubs at the time.  I recalled Nick Arrojo playing the Haçienda a lot more that summer of 1990. Graeme Park, Mike Pickering and Dave Haslam were away - perhaps there was the possibility of mix or two from the tour out there! Along with Paul Oakenfold, Oakenfold, although not a Hac regular had DJ'd with Pickering earlier that year and was famous for his Happy Monday and 'future' remixes they were off showing the US what the Haç was all about. 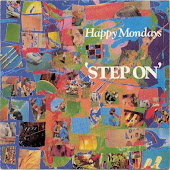 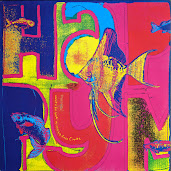 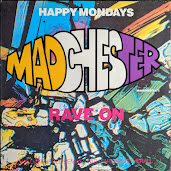 That summer, Madchester and the Haçienda were all over America's music press.  Manchester bands were on heavy rotation on radio stations,  and tours were set up for a host of Manchester bands and artists. Addressing the seminar under the banner 'Wake Up America, You're Dead' Anthony Wilson headed over to speak at the New Music Seminar in New York promoting what was happening in Manchester at that time in the manner that only he could.  Speaking to 200 of the Who's Who of America's music industry he opened with the statement:  "Welcome to the New Music Seminar. The rest of the shit going on in this building this week is the OLD Music Seminar. This is the New Music Seminar." Certainly, one noticeable way to make an entrance. Manchester in the house! Kevin Cummins reported on the seminar for the NME, (worth a read) that Wilson and the northern contingent ended up causing so much mayhem that Derrick May ended up arguing and Marshall Jefferson just up'd and left. Wilson must have had a mischievous glint in his eye. Here's an extract by Wilson:

"What people in America don’t realise is that the music which has come out of Chicago and Detroit in the last ten years has so changed British pop music - not only dance but rock music - that now if you’re a British rock band and you can’t play in a style to which you can dance and with the rhythms that have come out of America but that have been ignored here, then you aren’t a rock group that matters. You are dead."

It didn't hinder things or stop there though. Wilson continued to 'plot [his agenda], the invention of House music in Chicago, the evolution of E in Ibiza and how on the Sixth Day God Created Madchester before going down the Haç for a bit of demonic freaky dancing' which was to set the scene for the months that were to come. It was probably the constant referencing about drugs that freaked people out! However, the legacy was set, Manchester acts were booked in the States, the Haçienda tour went ahead and nearly everyone was loved up!  The big difference between the dance music scene in the US and Madchester was the association between the music and ecstasy.  In the UK they went hand in hand, in the States it was somewhat different, the association between house music and ecstasy hadn't taken off in quite the same way.

Kevin Cummins New Musical Express August 4 1990 - New Music Seminar
The American press were a little unsure what to make of the onslaught of British bands, with all due respect to them I'm sure most of the British press were just as outraged and didn’t understand it either but that’s for another story.  The difference was the British press tried to control and outlaw it, whilst I found a natural curiosity to the American reporting about Madchester. It was inquisitive as if they were trying to reference and understand something that had no understanding.   Newsweek in July 1990 did attempt to describe it with some affection:

“Kids who weren't even born during the psychedelic '60s are slipping into paisley skirts and bell-bottom jeans and heading for updated love-ins known as "raves." Scrubbed and mellow and often stoned out of their gourds, their Monkeys haircuts bobbing and their bright, baggy clothes flopping, they dance until dawn to the untiring pulse of drum machines”

Weekday's endearing reference to chip butties as ‘sandwiches made with French fries and butter’ did make me giggle as they attempted to describe Manchester though. 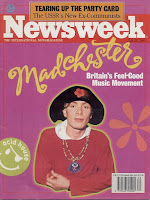 Published ahead of the New Music Seminar, Newsweek continued: 'The philosophy is simplistic, the politics nil. And the whole package, still nameless and leaderless, was created in Manchester, England. The kids call it Madchester......their ethos amounts to little more than dancing. drugging and hugging in places with liberal curfews.' Yep - they got it spot on!  In reality, it was about getting loaded dancing to music and having a good time, being with your mates, chatting shit to random people, sharing the experience and being part of something exciting - oh, not forgetting the hugs! Anthony Wilson was right when he chirped in stating it was about 'collective strength and community, there is power in people being lovely to each other.' Manchester hype was certainly bubbling. 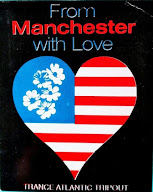 The scene was set.  Madchester headed over to the States. Initially, the Haçienda DJs, Adamski, 808 State, Happy Mondays and Inspiral Carpets were met by attendances on the lower side. However, as media attention increased with the likes of 'Tony the Tigers' tenacious tirades at the music seminar, so the buzz spread with reports of up to 4000 trying to see 808 State and the Mondays at the Sound Factory in New York - 2000 did!  By October the Inspiral Carpets were booked for a month-long tour and the Stone Roses were set to take America by Storm. Madchester had arrived. 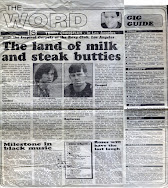 The United States of Haçienda Trans-Atlantic tour visited 9 cities that summer from Miami, through Los Angeles and on to New York accompanied by a host of British dance acts mostly from Manchester.  One such venue was the Metronome in Dallas, third stop on the tour.  The Metronome was perhaps the perfect venue for the Haçienda tour.  The Metronome had a history steeped in hedonism and excess - one that could have given Studio 54 a run for its money.  Frequented by artists such as Grace Jones, movie stars and the more flamboyant clubbers from Dallas night life, the Metronome had previously been known as the Starck club.

The Starck Club 1984 - To become the Metronome

Famous for its party excesses, the Starck Club had queues stretching down the road. It was where the rich and non-rich, white and black, gay and straight blended in a sleek, Bauhaus-inspired room and where MDMA (ecstasy) was legal. Although back then the link between ecstasy and dance culture wasn’t widespread and not the go to drug of choice it was rife at Starck until the DEA decided enough was enough and raided it 1986 after making ecstasy a 'catagory 1' drug . A parallel not dissimilar to James Anderton's relentless police onslaught on Manchester nightclubs. The Metronome's legacy made for quite a location for the Haçienda tour, moreso as both clubs had a previous life as warehouses!  Legend has it that on the night the British contingent were on the hunt for a certain dance stimulant although the drug was now not as popular in Dallas nightclubs as it once had been. There was none to be found. 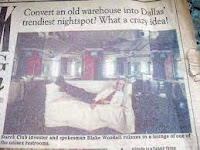 Recently, I caught up with DJ Jeff K who was instrumental in bringing the Hacienda tour to Dallas. At the time, Jeff was DJ at a Thursday night residency at the Metronome called 'Rave.'  He also hosted a weekly Saturday Radio show at KNON 89.3 called 'Thud Slap.' Jeff played a mixture of Indie, Industrial dance, new wave, and early rave. With his finger on the pulse and the thirst for imports Jeff, introduced an eager Dallas audience to a host of Manchester bands from Cabaret Voltaire, Candy Flip, 808 State, New Order and the Happy Mondays - all would feature regularly on his shows.  Although many years have passed, memories blurred, Jeff recounts that the United States of Haçienda Tour night was ‘magical, generated by the excitement, that, two of the world’s hottest DJs were playing in Dallas’ - had I the chance, I would have had my perfecto remixes signed too! What is magical for me, is that Jeff had the foresight to capture the night on tape, although in true Haç style, he is still trying to trace the original recording of the whole night. 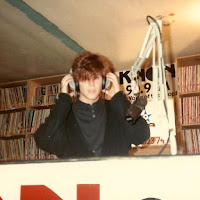 Blog51 would like to send a huge thank you and respect to Jeff for having the foresight to hit record that night and for sharing 30 minutes of Mike Pickering and Paul Oakenfold gracing the decks on his show the following night.  The Haçienda had hit America with love.  As well as the Haçienda recording, I have added a link to Jeff K's website and Mixcloud page where you can find some excellent recordings of his shows broadcast on KNON 89.3 and 94.5 KDGE that capture the feel of what was being played in Dallas clubs. Jeff's shows would blend guest mixes from acts like the Prodigy and Moby with new tracks from the local scene as well as playing indie dance and rave.  Got a spare couple of hours - check his shows out, the memories will flood back.  Cheers Jeff, this Blog51 posting is dedicated to you.  For a taste of 'From Manchester with Love - the United Sates of Haçienda Tour' click the link below and enjoy.