I am going to be honest here. I am a tad nervous about this post.  Why?  Well, I know it's my Blog, my opportunity to reminisce, share DJ sets and generally warble on about the Haçienda but this post is about someone who I respect incredibly for his knowledge and the part he played in the Haçienda story back then and even now.  Dave Haslam.

Writer, journalist, presenter, promoter, DJ, author, University Lecturer, art curator, Dave's knowledge, experience and talent are outstanding. Take a read of the excellent 'Manchester England,' 'Adventures on the Wheels of Steel’, and 'Life After Dark' all make compelling, insightful and entertaining reading about the music scene, DJ's and nightlife in Manchester, the Northwest and indeed the UK. All are well researched, interesting and bloody good to read, or seek out Fanzine's such as Debris described by the NME as the best fanzine in the world! - It's little wonder I feel nervous - I just have to keep in mind this is a bit of fun, I guess!

Dave Haslam - Essential Reading - all informative and worth a read.

Dave Haslam was DJ at the Haçienda from 1986 to 1990 where he graced the booth around 450 times. He also held a residency at the Boardwalk with his night Yellow accompanying Elliot Eastwick and Jason Boardman. Dave's weekly Thursday night at the Haçienda was named 'Temperance Club' where he played anything from Grace Jones, New Order to Talking Heads and the Stone Roses.  Soon he was mixing dance tracks into his sets reflecting the emerging scene that was spilling out of the Haçienda on other nights.  Indie dance soon became huge in Manchester and surrounding towns and cities, with its focus on indie guitars, electronic grooves, ecstasy and funked up vibes.  Check out New Orders 'True Faith,' 'Fools Gold' by the Stone Roses and 'Wrote for Luck' by the Happy Mondays to see for yourself.

Temperance Club At the Haçienda

Soon Indie dance was everywhere Saint Etienne’s Balearic 'Only Love Can Break Your Heart,' Primal Scream saying it like it was with 'Loaded’ even James crossed over with 'Come Home' all received dance remixes, something massive was happening, neatly captured at the Temperance Club nights.

I recall going to a couple of Temperance nights around 1987 and really enjoyed them. Cheap lager, great tunes leaning heavily on Manchester acts like the Fall, the Smiths and of course my favourite, New Order.  A few years later, the atmosphere was totally different, gone were the shoegaze indie vibes - hello Madchester!  It was certainly more upbeat, chemical fuelled and well happy - clubbers no longer danced looking down at their feet (mostly)!   I did love it, especially as I felt connected to what Dave was playing in a different way.  At the time I was DJ at Warrington Legends on a Friday night and CJs on Saturdays.  I used to get a bit of hassle for mixing up dance tunes with indie stuff (I couldn’t mix for toffee at the time though) but I did enjoy a bit of Doug Lazy, 808 State and A Guy Called Gerald and thought those on the Indie dancefloor should too.  Mind you I was known for dropping ACR, Cameo, Prince and Duran Duran alongside The Fall, Stone Roses, Felt, Cocteau Twins and the Smiths. Incidentally, one night some guy gave me £100 to play the whole of the Stone Roses album, all he needed to do was ask and I would have played it for free.  I thought it was fun anyway.   It was a nice surprise to know other DJs were mixing it up it too.  What made me giggle to myself though, was the irony with the name of the night - Temperance - meaning to show restraint, moderation, balance etc.... The Haçienda was the last place that showed restraint! I do love a bit of irony!  Perhaps Dave took the name from a quote from Fredrick Engels who wrote describing Manchester - cited from his book 'After Dark' - I need to pluck up the courage and ask him!

“On Saturday evenings, especially, when wages are paid and work stops somewhat earlier than usual, when the whole working class pours from its own poor quarters into the main thoroughfares, intemperance may be seen in all its brutality.”

Quite apt for what was happening once again in Manchester, the only difference was in Manchester it happened every night and often for 24 hours! It was this intemperance, rife in Manchester's music scene that was soon to earn it a new nickname.  The city and surrounding suburbs went bonkers from 1988 onwards. Ecstasy had hit Manchester big time, the crossover between indie and dance was inevitable. It was wild, a new subculture was born, we thought we were it.  I am mindful of a line in one of Dave's books 'After Dark', where he says, 'each generation thinks it invented staying out late and invented hedonism' but when you really look back at it, really think about it - our generation definitely did, maybe! 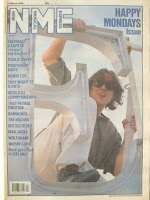 Inevitably, what was happening In Manchester couldn't stay local - soon the madness attracted the attention of the British Music Press. In 1990, such was the interest in Manchester's music scene that there were 13 front covers dedicated to it by the NME alone. Manchester artists, The Charlatans, Happy Mondays, The Stone Roses, Inspiral Carpets, 808 State all began their world dominance. The press couldn’t get enough. All of a sudden kids all over the country were into baggy jeans, trainers, tie dyed tops and bucket hats as everyone got 'mad for it'.  Eager to label what was happening, the scene was branded 'Madchester' by the Mondays and the music press jumped all over it. Quite comical really. Again, the irony of it all was that no one in Manchester actually used the term.  Baggy clothes and trainers were worn because they were comfortable to dance in, you knew were going to sweat on the dancefloor or in a field and this suited us better.  I do think flares were a bit of a Manchester trend during the 1980's anyway. Perhaps more of an anti-establishment statement than contrived to meet a name championed by the music press. 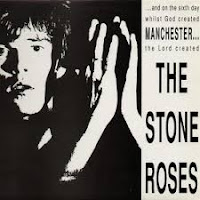 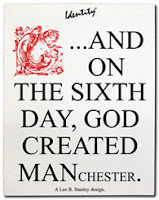 Manchester says it how it is!

I saw a guy the other day, it was after the 40th Birthday Celebration party for the Haçienda.  He was only young and was wearing a shirt that was a proper nostalgia trip.  He had that air of arrogance, that what he was wearing summed up what it was all about kind of feel - a certain kind of swagger - this made me smile. I should have asked him for a photo! It took me straight back to 1988/89/90.  The shirt read - 'on the Sixth Day God Created MANchester'.  I think this is the attitude that summed up Madchester, a feeling kids could do anything, be anything and live how we wanted and sod the rest! It is easy looking back to get nostalgic for the term, it is easy to forget that Shaun Ryder (I think it was) who once said, 'no one used the term in Manchester - unless you were a prick!'  Says it all really.   The shirt was the brainchild of Leo Stanley who had a stall called Identity at Afflecks Palace in the Northern Quarter of Manchester.  After a night out at the Haçienda Leo couldn’t sleep, so he began reading the bible stopping when he read 'and on the sixth day God created man...' - the rest was history.

Created by God in Manchester Sold at Afflecks Palace by Identity....
Manchester was alive, Affleck’s Palace was buzzing, it was as if every stall in there had been born out of the energy created around the music scene, clothes, designers, record shops, tape sellers, house music pumped out from every stall and shop, there was no escaping the fever that had been generated and why should you need to! Party while you shop so to speak.

On the back of all the music press attention, I do recall an influx of new faces in the Haçienda.  At the time people were already travelling from around the country clued up as to what the Haçienda was about, but now we began to see a more tourist audience appear. People too dressed up to dance, Americans, Europeans, thinking they were at the place to be.  I remember chatting to an American lass, quite obnoxious at the beginning of the night, clueless as to what was happening.  She didn’t seem to understand why the crowd was so diverse, why people were just dancing, why people weren't drinking alcohol, why it wasn’t a meat market so to speak. She had heard about the Haçienda whilst in the US and was open about looking to meet someone.  What was beautiful was that by the end of the night her perspective had been altered, she got it! if you got it, you became part of that community - you were welcome!  Leave your pre-conceptions at the door. Perhaps it was this new tourist perspective that led to some regulars finding other clubs to go to, perhaps not.   I'm sure I’ve made more of this than happened but what didn’t change was the music, the atmosphere and the excitement. It was the best club in the world, and it changed our lives.

Dave Haslam - Dancefloor - As played at Temperance - The Face January 1990
There appears to be a distinct lack of Temperance Club tapes about, however, as always, Blog51 Has a bit of a treat.  Unfortunately, it is only one side, but it is 45 minutes of pure Temperance.  Experience Thursday Nights at the Haçienda with New Order, Reese, DJ Mink, The Stone Roses, Happy Mondays and 808 State plus more as played by Dave Haslam on the Haçienda Wheels Of Steel. Enjoy.
1990.01.04 Dave Haslam - Haçienda Manchester - Temperance Club